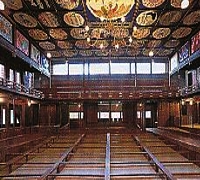 The Yachiyoza Theater is a two-storied wooden building in the kabuki theater style of the Edo era(1603-1867）. In spite of being a Jpanese-style theater, some portions of the Yachiyoza Theater are quite western : for example, iron tubes for certain columns, and a western-style girder structure.

Audience seats coverd with tatami mat「畳」, are located at the 1st and 2nd floor. The seating capacity is about 700 at present.(We have chair type seats now)
1) Hanamichi(flower avenue) 花道
It is said that the word "hanamichi" comes from the way the actors would enter the stage, as brilliant as flowers. They are straight passages of the same height as the stage, running through the audience seating to the back.The left one, when facing to the stage, is called hon-hanamichi(main-hanamichi), and the right one is called kari-hanamichi(temporary-hanamichi).They are mainly used when major characters enter or leave the stage. Actors walking on these raised walks attract the gaze of the entire audience.

2)Suppon すっぽん
A small stage located on the hanamichi about a third of the way along it from the stage. It can move vertically for special effect . In dramas, ninjya or ghosts appear here, rising from under the floor.

A "Suppon" is a kind of turtle. It is said that the head of a ninjya appearing here looks like an emerging turtle, leading to the devices name. On the stage proper, the same device is called the "seri".

3)Stage at the center of the main stage there is "mawari butai"廻り舞台 , or rotating stage. This is helpful for smooth scene change in plays , as the next scene can be prepared on the rear side while the first scene is being performed.

The rails and wheels for this roating stage were made by a German company ”krupp”.  The mezzanine spreading from the stage to hanamichi is called the"naraku" means "Hell"

4)Gakuya「楽屋」
The gakuya are actors-room for make-up and waiting. They are located at the back of the main stage. with a passage connecting them. there are eight rooms on the 1st floor and nine on the2nd. 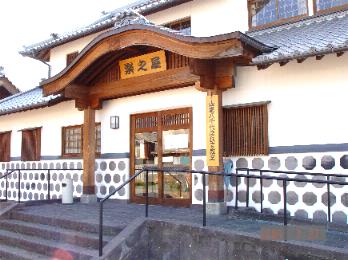 5)Audience seating
there are two classifications for audience seats, masu-seki「枡席」 and sajiki-seki「桟敷席」. The masu-seki, located between two hanamichi, is deviced into squares with wooden bars and is built lower than the hanamichi.The sajiki-seki run between the hanamichi and the walls on both sides.The right sajiki-seki, facing to the stage, is called "kamite sajiki" These seats are generally thought to be the best in the house, and were the ones used for special guests.